Vested is a Start-up Crowdfunding Portal ("Site"), operated by Vested Technology Corp., and is not registered under Canadian securities legislation in any jurisdiction in Canada. Vested, and third-party Crowdfunders offering investments on this Site, rely on National Instrument 45-110 Start-up Crowdfunding Registration and Prospectus Exemptions for exemption from the dealer registration requirement in the case of Vested and the exemption from prospectus requirements in the case of third-party Crowdfunders. Vested does not provide advice about the suitability or the merits of any investment offered by third-party Crowdfunders through the Site.

If you participate in any investment offered by a third-party Crowdfunder on the Site, Vested will hold any funds received from you in trust for you, separate and apart from Vested's own assets, in a designated trust account at a Canadian financial institution.

VANCOUVER, BC, Aug. 20, 2020 /CNW/ - Tarachi Gold Corp. (CSE: TRG) (FRA: 4RZ)  ("Tarachi" or the "Company")  is pleased to announce initial high-grade results from channel sampling at the La Dura historic underground mine on the Jabali concession at the Tarachi project in the Sierra Madre Gold Belt of Eastern Sonora, Mexico. 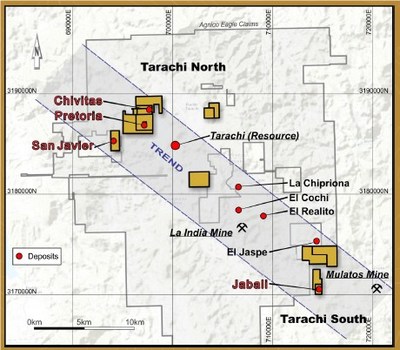 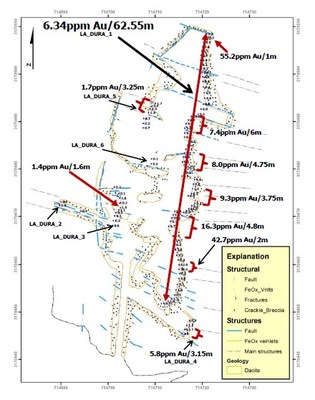 Mapping and detailed underground channel sampling at the La Dura area of the southern Jabali concession has been completed. Initial fire assays returned high-grade results over significant widths including 6.34 g/t gold over 62.55 metres in La-Dura-01 including a sub-interval of 42.65 g/t gold over 2 metres. The sampling program was intended to test and expand on historic results as well as outline initial drill targets. A total of 91 rock-saw channel samples were submitted to BV Laboratory in Hermosillo. Samples were taken at the best available underground exposures roughly perpendicular to the mapped East-West striking breccia structures.

Previous exploration and drilling on Jabali had been based on a north-south interpretation of the mineralized structures. While regionally there is a northerly trend, recent detailed mapping by Tarachi's geological team has identified a series of steeply dipping east-west striking crackle breccias which locally control the high-grade gold mineralization.

Tarachi's President and CEO, Lorne Warner CEO comments "We are very pleased to announce this impressive sampling intercept of 62.55m at 6.34 g/t gold. These high-grades over broad widths demonstrate the immense potential of the Tarachi project. Additionally, the reinterpretation of the steeply dipping breccias featured at La Dura creates a significant opportunity for Tarachi to drill the historic mine area in a brand-new way. With over C$10 million in the bank and these initial high-grade results, I believe the Company is in an excellent position to deliver value through exploration."

Results are detailed in the chart below:

The Company expects to announce further sampling results in the near term and is preparing to begin drilling. The Tarachi project is host to multiple high-grade gold targets and the Company will announce details surrounding its drill campaign shortly. An exploration camp has been erected in the Tarachi area and stringent Covid-19 protocols have been put in place to ensure the safety of local communities and the team in the field.

All channel rock samples were taken underground in the La Dura mine on the Jabali concession using a Husqvarna K770 14-inch gas powered disc saw. Two cuts were made about 5cm apart then a continuous channel of rock between the cuts was removed with a hammer and chisel. Samples varied in length between 0.4m and 1.25m. Sample tags were submitted into each bag before being sealed and stored at the campsite in a secure area and were later transported by company truck directly to the Company to Bureau Veritas Mineral Laboratories (BVM) in Hermosillo, Sonora, Mexico. At the laboratory the samples were dried, crushed and pulverized with the pulps being sent airfreight for analysis to BVM in Vancouver, B.C. for 37-element ICP analysis after modified aqua regia digestion. Gold assays are done in Hermosillo by 50-gram fire assay with an atomic absorption spectroscopy finish.

Samples were checked using a 50-gram fire assay with a gravimetric finish for samples greater than 10ppm Au and 1Kg metallic fire assay with duplicate minus fraction analyzed. Both Hermosillo and Vancouver BVM facilities are ISO 9001 and ISO/IEC 17025 accredited.     Laboratory control samples comprising certified reference samples, duplicates and blank samples were inserted by the laboratory into the sample stream and analyzed as part of the quality assurance/quality control protocol.

The Projects consist of the San Javier, Pretoria, Chivitas, Jabali, Juliana, Texana and Tarachi concessions for at total of 2,560 hectares in the prolific Mulatos gold belt. The Projects are approximately 220 km by air east of the City of Hermosillo, and 300 km south of the border between the United States of America and Mexico. The Jabali claim covers the La Dura historic mine and several other small-scale mines. The gold mineralization and geology at Jabali is believed to be similar in character to the gold mineralization at the Mulatos mine. Alamos Gold Inc., in a 2003 annual report, identifies the Jabali project as being part of the "Los Bajios" mineralized trend which the report suggests has the potential to host another Mulatos size resource. The Tarachi project is an early stage exploration project and the mineralization hosted on adjacent and/or nearby properties is not necessarily indicative of mineralization hosted on the Company's property.

The Mulatos gold trend is part of the Sierra Madre gold and silver belt that also hosts the operating Mulatos gold mine immediately southeast of the La India property and the Pinos Altos mine and the Creston Mascota deposit 70 kilometres to the southeast. Mineralization occurs within silicified rhyodacite and is associated with vuggy silica alteration, and breccia with iron oxide (hematite and specularite). Native gold occurs along late-stage fracture coatings in the breccias and is locally associated with barite. Past exploration has returned values from trace to 30g/t Au in grab samples. Native gold has also been identified in outcrop on the southern extension of the La Dura mine trend.

Lorne Warner, P.Geo, President, CEO and Director of the company is a qualified person as defined by National Instrument 43-101 and has reviewed and approved the scientific and technical disclosure in this news release.

This news release includes certain "Forward–Looking Statements" within the meaning of the United States Private Securities Litigation Reform Act of 1995 and "forward–looking information" under applicable Canadian securities laws. When used in this news release, the words "anticipate", "believe", "estimate", "expect", "target", "plan", "forecast", "may", "would", "could", "schedule" and similar words or expressions, identify forward–looking statements or information. These forward–looking statements or information relate to, among other things: the exploration and development of the Project; future mineral exploration, development and production including the identification of a work program.

Forward–looking statements and forward–looking information relating to any future mineral production, liquidity, enhanced value and capital markets profile of Tarachi, future growth potential for Tarachi and its business, and future exploration plans are based on management's reasonable assumptions, estimates, expectations, analyses and opinions, which are based on management's experience and perception of trends, current conditions and expected developments, and other factors that management believes are relevant and reasonable in the circumstances, but which may prove to be incorrect. Assumptions have been made regarding, among other things, the price of silver, gold and other metals; costs of exploration and development; the estimated costs of development of exploration projects; Tarachi's ability to operate in a safe and effective manner and its ability to obtain financing on reasonable terms.

These statements reflect Tarachi's respective current views with respect to future events and are necessarily based upon a number of other assumptions and estimates that, while considered reasonable by management, are inherently subject to significant business, economic, competitive, political and social uncertainties and contingencies. Many factors, both known and unknown, could cause actual results, performance or achievements to be materially different from the results, performance or achievements that are or may be expressed or implied by such forward–looking statements or forward-looking information and Tarachi has made assumptions and estimates based on or related to many of these factors. Such factors include, without limitation: satisfaction or waiver of all applicable conditions to closing fluctuations in general macro–economic conditions; fluctuations in securities markets and the market price of Tarachi's common shares; and the factors identified under the caption "Risk Factors" in Tarachi's management discussion and analysis. Readers are cautioned against attributing undue certainty to forward–looking statements or forward-looking information. Although Tarachi has attempted to identify important factors that could cause actual results to differ materially, there may be other factors that cause results not to be anticipated, estimated or intended. Tarachi does not intend, and does not assume any obligation, to update these forward–looking statements or forward-looking information to reflect changes in assumptions or changes in circumstances or any other events affecting such statements or information, other than as required by applicable law.

Are you ready to get started with equity crowdfunding?

Vested.ca provides equity crowdfunding investment opportunities in Canadian companies. Get started online for as little as $100.