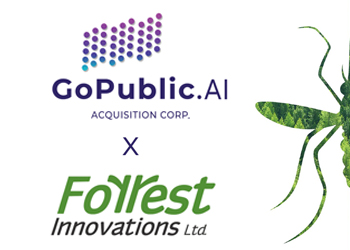 GoPublic.AI Acquisition Corp. (“GoPublic.AI” or the “Company”), has entered into a Letter of Intent (“LOI”) dated June 15, 2021, with Forrest Innovations Ltd. (“Forrest”), a private company incorporated under the Israeli Companies Ordinance (ICO),  to acquire 100% of the issued and outstanding shares of Forrest (the “Transaction”) pursuant to a share exchange agreement (the “SEA”) described as a reverse takeover of GoPublic.AI by Forrest (each a “Party” and collectively the “Parties”). The precise terms of the Transaction, including the structure of the Transaction, will be incorporated into the SEA to be negotiated between the Company and Forrest.

Here's how GoPublic.AI Acquisition Corp. is planning on using the funds raised from this crowdfunding:

GoPublic.AI Acquisition Corp. (“GoPublic.AI” or the “Company”), has entered into a Letter of Intent (“LOI”) dated June 15, 2021, with Forrest Innovations Ltd. (“Forrest”), a private company incorporated under the Israeli Companies Ordinance (ICO),  to acquire 100% of the issued and outstanding shares of Forrest (the “Transaction”) pursuant to a share exchange agreement (the “SEA”) described as a reverse takeover of GoPublic.AI by Forrest (each a “Party” and collectively the “Parties”). The precise terms of the Transaction, including the structure of the Transaction, will be incorporated into the SEA to be negotiated between the Company and Forrest.

It is a condition of the proposed Transaction that the Parties receive all required board, shareholder, third party, and regulatory approvals, and that the resulting issuer (the “Resulting Issuer”) receives conditional approval to list its common shares on a major stock exchange based in Canada. In connection therewith, the Company expects to file a non-offering preliminary prospectus (the “Prospectus”) with the British Columbia Securities Commission (the “BCSC”) and a Listing Application (the “Listing Application”) with a Canadian stock exchange, in accordance with the policies of the BCSC and the chosen exchange.

Forrest was founded in 2013 and is a private Israel-based biotechnology company focused on mosquito-borne disease eradication with expertise in medical entomology R&D, healthcare, and molecular biology. Their proprietary technology, Natural Vector Control, is commercially approved. Forrest's pilot and commercial projects in Brazil led to a demonstrated more than an order magnitude reduction in Dengue fever occurs in the treated areas¹.

To date, Forrest has raised $CAD 17 Million in both equity and convertible debt from a mixture of Israeli, Brazilian, Australian, and North American investors.

Summary of the Transaction

Subject to the terms hereof, the Company and Forrest will enter into a business combination by way of an amalgamation, merger, arrangement, takeover bid, share purchase, or other similar forms of transaction or a series of transactions that have a similar effect (the “Transaction”). The Parties agree that the final structure of the Transaction is subject to receipt of final tax, corporate, and securities law advice for both the Company and Forrest. The Transaction is expected to require the security holders of Forrest to exchange 100% of their preferred and common shares, options, and warrants for common shares, options, and warrants in Acquiror. The exchange ratio and consideration are yet to be determined. The Transaction is to be completed pursuant to, and in strict accordance with, available exemptions under applicable securities laws.

The completion of the Transaction is subject to the satisfaction of various conditions as are customary for a transaction of this nature, including but not limited to: (i) the Company and Forrest having had the reasonable opportunity to perform searches and other due diligence, and being satisfied with the results of such due diligence; (ii) receipt of all requisite consents, waivers, and approvals for the Transaction, including the approval of the Company and Forrest’s Board of Directors and shareholders; (iii) the absence of any material adverse change in the business, affairs or operations of GoPublic.AI or Forrest; (iv) the Parties’ entering into the SEA; (v) completion of the Private Placements; (vi) conditional approval from the chosen Canadian stock exchange to list the Resulting Issuer’s shares; and (vii) Forrest having received the requisite approvals from its shareholders for the Transaction.

It is anticipated that in connection with the Transaction, the Company will complete two financings. Firstly, to fund Transaction expenses, the Company intends to immediately complete financing of up to $CAD 80 Thousand at $0.10 per share (the “Interim Financing”). Secondly, pursuant to the signing of definitive agreements, the Company intends to complete concurrent financing of a minimum of $CAD 3 Million with the structure and pricing to be in the context of market conditions prevailing at the time of closing (the “Concurrent Financing”).

The above plans and the Transaction are all subject to a number of conditions precedent being satisfied, including due diligence, financing, any required regulatory approvals, and the finalization of definitive agreements. There is no guarantee the Transaction or the financings will be completed as contemplated, or at all.

Directors, Officers, and Insiders of the Resulting Issuer

Following the Closing, it is expected that the following individuals will be appointed as managers of the Resulting Issuer:

Nitzan Paldi is the Founder and CEO of Forrest Innovations since 2013. Between 2011-2013, Mr. Paldi served as a platform leader in the Monsanto ‘Biodirect’ (RNAi) program. In this role, Mr. Paldi was responsible for the Bee-Health platform. Between 2007 and 2011 Mr. Paldi was Co-Founder and Chief Technology Officer at Beeologics. In this role, Mr. Paldi orchestrated the rapid progress of Beeologics from the conception of the idea all the way to FDA approvals for all safety technical sections and phase 3 equivalent efficacy trials. Mr. Paldi was part of the team that sold Beeologics to Monsanto for over $CAD 150 Million. Between 2001 - 2006 Mr. Paldi was Head of R&D and COO of Bio-Oz Biotechnologies Ltd. Mr. Paldi holds several patents and articles in the field of bee and mosquito research. Mr. Paldi has a B.Sc. in Life Sciences from  Ben Gurion University and has an M.Sc. Agri in Agriculture from The Hebrew University in Jerusalem.

Since Forrest’s inception in 2013, Elaine has led all aspects of the Brazil operations, navigating the transition from start-up through regulatory approvals and formal commercial authorizations and operation. In 2020, Elaine was promoted to global head of Operations.

Elaine holds a degree in law studies and is a certified lawyer in Brazil.

In connection with the Transaction, the Parties agree that finder's fees may be paid concurrently with the Closing to eligible finders who are not related parties to either Forrest or GoPublic.AI.

Further details of the Proposed Transaction will be included in the SEA, Prospectus, Listing Application, and in subsequent news releases and other public filings.

GoPublic.AI is currently a non-reporting issuer. The Company's principal business activity has been to identify and evaluate opportunities for the acquisition of assets or business. The Company is headquartered in Vancouver, British Columbia.

Investors are cautioned that, except as disclosed in the management information circular, filing statement, or such other document to be prepared in connection with the Transaction, any information released or received with respect to the Transaction may not be accurate or complete and should not be relied upon. Trading in the securities of a reporting issuer company should be considered highly speculative.

Note: All funds are expressed in Canadian dollars.

Make a selection to confirm your participation as a crowdfunder: